So many K-cup coffee makers focus so much on the speed at which they can make a cup of coffee that many of them actually sacrifice the quality of the coffee to achieve extreme speed.

When you press the brew button on a k-cup coffee maker the machine has to first heat the water to a good brewing temperature which usually takes a little over a minute and then it has to actually brew the coffee.

For the fastest machines this brewing step takes just over half a minute but most take nearly a minute to actually pump eight ounces of water through your coffee-pod.

The best machines however give you an option to brew with a strong or bold setting. All this means is that the machine will take a little longer to pass the water through the k-cup into your coffee mug.

Each machine is different but on average each machine adds 20-30 extra seconds to brew your coffee and the taste is apparent to most people.

Here are the best K-Cup coffee makers on the market today that incorporate the “Strong Button” or a “Bold Setting”… and in case you don’t realize it you don’t usually have to spend a lot of money on a high-end machine to get this setting.

► The Keurig K-Mini Plus

This machine comes in a variety of colors and the strong button works great. The machine is easy to add water to and brews super hot coffee but I don’t like how loud it is during the brew process.

For an entry-level machine that also includes a bold setting you can’t go wrong with this version of the Flexbrew. It comes with an easy-fill water reservoir, removable brew-basket pieces that can cleaned easily, and a dedicated button to extend the brew cycle for a strong, bold cup of coffee.

This machine offers a whopping five different brew sizes for a single cup of k-cup coffee ranging from 4oz to 12oz. The machine offers a very large 75oz removable reservoir and a a strong brew button for slower but stronger cups of coffee.

I have owned a Cuisinart coffee maker since 2011 without a single problem so I’m partial to the brand. This machine offers single-serve k-cup brewing complete with a “bold setting” for a stronger brew than normal but it also features a full carafe style option in either a 12-cup glass carafe or a 10-cup thermal carafe!

The K-Duo is able to make a batch of k-cup, single serve coffee in two styles, quick brew or strong brew fashion. It is also able to brew full 12-cup carafes using conventional coffee grounds through paper filters for those times when a larger quantity of coffee is more desirable.

If all you care about is the extra button to control the strength of your brew then all you need to know is in the above table.

For those of you looking for a bit more information on the aforementioned single serve machines then let’s dive into the review section below.

Contrary to what is normal on the internet each of these reviews is based on personal experience. I literally own each of these machines, purchased with my own money. I have also brewed hundreds of k-cups in these machines collectively so I know what I’m talking about here.

1. The K-Mini Plus Brewer

The K-Mini Plus is a basic k-cup single serve machine that does not offer you a way of brewing with your own coffee grind… unless you choose to buy the My-Cup separately which I have never actually used.

I bought this unit after I bought the basic K-Mini because I wanted to see the difference between the basic quick brew and the strong brew setting.

I also wanted to see what I thought of the k-cup storage compartment that comes with the K-Mini Plus.

To summarize I’ll say this – The storage compartment may be well-intentioned but it just gets in the way for me and gets a little messy.

After brewing a cup there is always an inevitable last drip that falls out of the brewer after removing the cup and replacing the storage compartment. Without the compartment this drip falls into the drip tray but with the compartment inserted it just falls onto the unused k-cups instead.

I put the compartment back into the box after trying to use it for about a week and haven’t given it another thought since.

I do recommend the Keurig however because it feels like it’s built to last a decade event though I’m sure the pump probably won’t last that long.

The brewer uses a big 1470 watt “engine” inside it that heats water to brewing temperatures in one minute and 33 seconds according to my timer. From first drip to the brew cycle shutting off it takes an additional 51 seconds to brew or one minute 19 seconds to brew when the “Strong Button” is selected.

The quality of the brew is great and the machines leaves no foul plastic taste in the coffee like some other cheap machines. I’d still recommend running a few water only cycles out of the box before actually brewing coffee but nothing crazy is needed.

I don’t like the loudness of the machine. I own a lot of k-cup compatible brewers, a lot, and this one is one of the loudest I have ever used. It’s not going to wake up the house or anything, just a slight annoyance.

One other thing I do like about it is the puncture needles. The top one is wrapped in a silicone seal that keeps leakages out the top of the k-cups to a minimum.

Overall I’m pleased with this machine’s design when it comes to cleaning and maintenance. I like machines that are easy to clean and this machine is better than most.

The last point of differentiation between this and some other k-cup machines is that the water reservoir is easy to fill by either pouring water directly into it from your coffee mug or by filling it directly from the faucet.

And if you don’t want to remove the reservoir, which I frequently don’t, the width of the reservoir makes it easy to pour right into from a mug without spilling. Oddly enough this seems to be a rare feature for small K-Cup brewers – most of the others have tiny reservoir pour spouts that make it hard to fill without making a mess.

The price of the Keurig K-Mini is usually higher than other small single serve only brewers but I think it’s worth the extra price over the competition. I just find it easier to use, clean, and I believe it will hold up the best over time.

You can see product pricing over on Amazon or on Walmart but if you want something a little cheaper then usually the Hamilton Beach Flexbrew will save you a bit of coin. Let’s review that next. 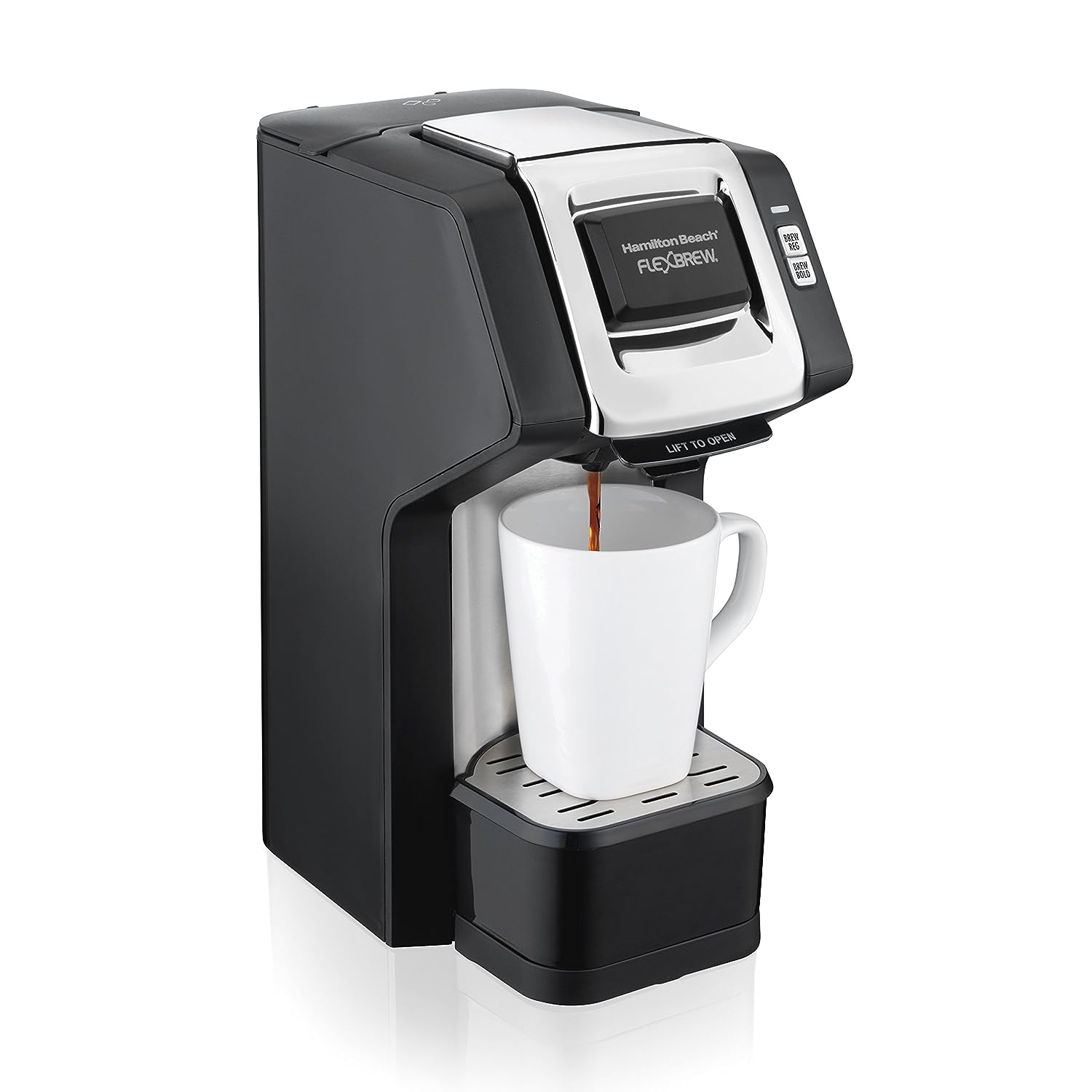 This single serve Flexbrew is Hamilton Beach’s “fancy” version. It is still low in price however when compared to brands like keurig.