I have officially owned the Bialetti Moka Express 3-Cup stove-top espresso maker for a month since middle of 2013.

I bought it in my local Fred Meyer on the 25th of June of that year and in the first month I used it around 30 times. This is obviously not as much as some people but for 30 efforts I feel like I’ve got it down – minus a bit of inevitable tweaking that I’ll refine over the next year or so.

In any event, if you’ve been following along here on the site you’ll know I recently gave away a 2nd Moka Express pot based on my first impressions of this awesome little contraption.

I also posted a few weeks back some basic cleaning instructions for the Moka Express.

Today I wanted to post a comprehensive review of the Moka Express 6799 – the three cup model – based on my use of this coffee/espresso maker over the first month I owned it.

First Things First
For all those coffee snobs out there you are correct – this moka pot (and all other moka pots) do not actually make espresso. Although the Moka Express can generate around 2 bars of atmospheric pressure while brewing this pales in comparison to a commercial espresso machines 9+ bars of pressure.

Yes, the moka pot generates enough to produce a tiny bit of crema in the pot it is rare to be able to transfer much of that crema (if any) to your cup without going through extra steps. Having said all that though, with the exception of some extremely sensitive palates, almost no normal person is really going to be able to tell the difference between the Moka produced by this pot and the espresso produced by your local Starbucks.

So long as you use decent beans that have been “relatively” freshly ground either at home or the store and you follow standard Moka Express brewing techniques (outlined below) you’ll get an amazing drink every time.

Before I bought the Moka Express I was somewhat confused to it’s parts and how it works. I took some pictures of mine up close to explain what you’re getting yourself into and how the parts work.

First you have the base. It’s where your fresh water goes. It has a valve that releases pressure if it gets too high. So far I’ve not generated enough pressure in my pot for this valve to come into play. I have read elsewhere that because the valve shouldn’t release very often you should periodically wiggle it around a bit to make sure it doesn’t stick – you know, should the valve ever need to open. 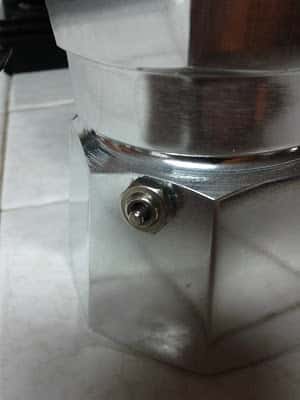 The middle portion of the moka pot is a small filter basket sitting on top of a funnel. As water heats in the lower chamber steam builds and pushes near boiling water up through the funnel into the grind sitting in the basket.

I’ve pictured below the basket empty when it was brand new and full after a month of use. Note that when full the grind goes to the top rim of the basket and is flattened out. It’s worth mentioning that you will always fill this basket to the top. It’s not really designed to work with less grind. Also worth noting – never pack the grind down like they do at a big espresso machine. This will make the pressure to high and can be a safety hazard.

Flattening the grind will pack it slightly so try not to pack it down anymore than you have to. The top part of the Moka Express is an interesting piece and it’s the part that most confused me prior to buying the coffee maker. It also has a filter screen. The filter screen is located on the bottom of it and is encircled by a rubber gasket. See photo below. The new unit is pictured on the left and after 30 uses it looks like the one on the right – the gasket is a bit dingier. What happens during the brewing process next is that the hot pressurized water is forced up through the grind and then the “espresso” is then strained through the upper filter and through a second funnel into the top chamber. The rubber gasket provides the airtight seal needed to maintain all this pressure.

One (of a few) reasons why everyone says to brew a Moka pot on a low setting is to preserve the integrity and longevity of the rubber gasket. They are cheap to replace but you don’t want to do it if you don’t have to. Plus brewing on a low setting typically results in a better flavor as the flavor extraction period (where the pressurized water is in the grounds) lasts a bit longer. See pics of the upper funnel and the upper chamber below. Obviously the funnel is brand new in the 1st pic and well seasoned (merely rinsed with cold water after each use) in the second pic.

Also note the replaceable gasket – it is what holds the upper filter in place. I find it’s easier to remove these pieces by running them under water while you remove them. I don’t tend to heavily clean the upper chamber but I do clean the gasket and filter to ensure the seal is as perfect as possible. I didn’t quite get it at first but the lid on the top of the unit makes no difference at all in the brewing process. In the end when coffee spills out of the upper chamber the lid can prevent splashes so I tend to keep it closed but you can impress yourself and friends by keeping it open – just watch out for scalding hot liquid flying through the air at the very end. 🙂

Sure, there’s always complaints but usually they are nit-picky and they are in this case as well.

You can’t immediately clean the Moka pot because it’s too hot to the touch. You can mitigate this by running it under cold water. I’ve done this but I tend to just clean it later in the day after it cools down on it’s own. Takes about 15 min without intervention if you are wondering.

There is consistently a bit of “mud” on the bottom of my cup which I never get from a professional espresso machine. This problem can be minimized by using a better grinder – preferably a burr grinder for size consistency and a slightly coarser grind to minimize small particles that can “float” through the filter and into the final coffee product.

At the store just ask for something between espresso and drip grind size and if you’re doing it yourself change your coarseness accordingly. Remember, burr grinders crush beans to a uniform size and minimize the dust that blade grinders produce so much of. Your grinder makes a big difference.

Another point of annoyance is pulling the coffee grind basket out of the lower chamber. It’s hard to do if you don’t want to make a mess. I like to pull the basket and dump the grind in the trash or compost heap rather than wash it down the garbage disposal and it takes a bit of effort to do this cleanly.

Tastes Aside, What Do I Like About The Moka Express

In short the coffee produced is as good as any coffee I could ever imagine creating in the home and it costs hardly anything to buy one of these pots. The price is fantastic.

I also like that making this coffee is just as easy as running a drip coffee maker. The cleanup takes an extra 30 seconds or so but the setup is arguably simpler. Add water, place grind in basket, set Moka Pot on the stove on low. 5 min later I have 6 ounces of “espresso” which I can drink straight up or water down for a larger volume Americano. The drip coffee pot takes just as long and sometimes longer considering the warm up period before the brewing process ever even begins.

I also like that using this stove top coffee pot gives me the incentive to use fresh beans rather than pre-ground coffee. You can taste the difference so much better because the flavor extraction of the grind is so much better. If I buy a Kona blend and then compare it to a Kenyan the flavor differences are insanely obvious. This makes drinking good coffee a lot more like drinking fine wine. You get to really experiment with flavors – even people with poor palates will be able to tell the differences.

When I started using the Bialetti to make my coffee/espresso I wasn’t sure how much water to put in the bottom chamber. Following the advice of others and experimenting a bit I’ve found that it’s best to always use the same amount of water and to fill the chamber up to the bottom of the pressure release valve as pictured below. By filling the water in the lower chamber any higher than this the pressure starts getting too high and the brew time seems to increase a lot.

My guess is overfilling the chamber may be a safety hazard too. Filling it lower will result in poor pressure and a less than ideal brew. Without adequate pressure more water will be left in the bottom chamber and you won’t get as much espresso.

I’ve already noted grind size but as for the type of coffee roast this is all up to you and your own personal tastes. I’ve tried everything in mine from light roasts to dark roasts including espresso roasts which are about as dark as anything I’ve ever seen. It’s all about the taste you like.

My #1 recommendation is to buy a very small amount of beans at your grocery store every time you go and always get something different. Use them all until you start finding the right beans and roasts for your personal taste.

If you don’t have a Bialetti Moka Express I hope this review was helpful. You can see the Moka Express 3-cup Moka Pot on Aamazon here. I bought mine for less in stores nearby my home but your mileage may vary in terms of pricing. In any event even at full price this is still one of the cheapest coffee makers you can get anywhere and it’s going to probably be your favorite too.

If you have any questions about anything – product dimensions, taste, design, whatever just drop them in the comments below. I’ll answer them all.

There’s a lot more to learn about moka pots. Check out one of the following articles on brewing stovetop moka or espresso right now!